Church-goers get to meet indoors again 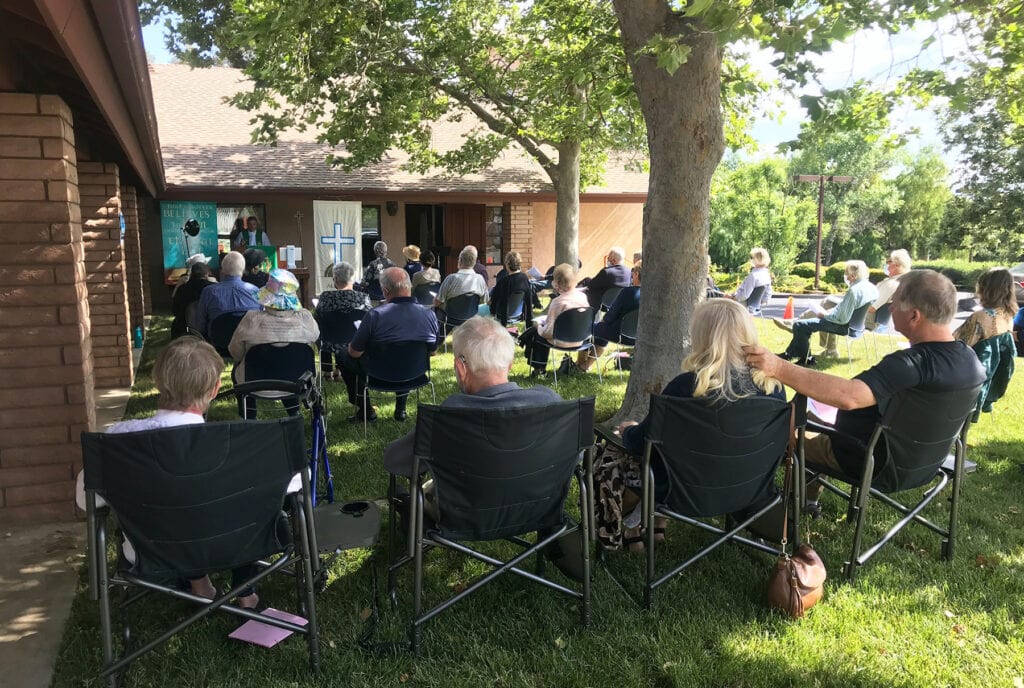 Members of Light of the Valley Lutheran Church have been meeting outside for several months.

Although the Supreme Court ruled that the governor couldn’t forbid churches from meeting, it upheld his rules on no singing and only  25% capacity of the building allowed inside.

One of the churches that met freely again on Sunday was the congregation of Light of the Valley Lutheran, the beautiful little church on Lilac Road & Betsworth Road that had been meeting outdoors for several months, come cold weather or clear.

LOV’s Pastor Paul Martin, told The Roadrunner, “We were thrilled [to hear the news]. We’ve been in full compliance. We have been outside for a long time. It’s been a challenge for us. We had to move all our seats and altar and sound system outside each Sunday and move them back in.” During cold weather, as well. “Now it’s a lot less work intensive.”

The first indoor service was Sunday. “Everyone was so happy!” said Pastor Martin. “We’re lucky we have a nice, beautiful sanctuary.  Everybody wore masks, and windows and door were open.” There was no singing. Well,  actually they sang one verse. The police probably won’t show up over that.

Pastor Martin conceded, “It’s become a political issue for sure. And, I think, whether you are a Republican or a Democrat for politicians if you don’t do something you are worse off than if you do something and it doesn’t work. I think politics is a crazy game and people are worried about staying in office. It did seem like I could go to a Home Depot or Walmart and have three hundred in there but we couldn’t have twenty-five people in our sanctuary.”

However, LOV wasn’t one of those churches that rebelled against the rules. “We believe, as a church body, in following our elected leaders. We could still worship, although it was difficult,” said Martin.

Father Luke Jauregui of St. Stephen Catholic Church told The Roadrunner, “I think most pastors would be happy the courts are in favor of us being able to worship in our buildings and instead of falling into the hysteria that has gripped the world. They made a partial good decision. At least we are on equal stance with other things like restaurants.”

He said he felt the church should be treated at least equally to a restaurant. “For a Catholic, it’s gathering around the heavenly feast. At a minimum we are in the same category,” he said. He also felt this was an issue of religious freedom. “On one hand I think the state has overstepped its bounds on dictating many things for churches. I don’t think they have a right for that but we want to be agreeable with the state as well. In these times people need faith more than anything, otherwise we fall victim to fear, when we really shouldn’t have fear.”

The Rev. Michael Carr , the priest-in-charge of St. Francis Episcopal Church in Pauma Valley, told The Roadrunner about the different approach his church has taken. “As of this time, the bishop of San Diego, the Rt. Rev. Susan Brown Snook, has expressly forbidden any clergy from holding services indoors.  In fact, we have recently received a pastoral directive that warns that we could be brought up on disciplinary charges if we were to be caught holding indoor worship.”

Pastor Carr added,  “I trust that these restrictions will end soon now that this ruling has come out.  Churches have been able to televise services held indoors, as long as there were 10 or fewer people present.  So the new court ruling might just allow a few more people to begin to worship again indoors, as long as they are using the rule of hosting only twenty-five percent of their buildings worshiping capacity.  Even so, there is a proven greater risk of contracting the virus while confined indoors.  Most of our Church buildings are not made to filter the air, and we have learned that the micro droplets from singing or speaking, even while wearing a mask, can travel much further than the required 6 ft separation.  Each congregation should carefully weigh the risks before making their decisions.”

He concluded, “So for St. Francis, this might very well usher in a change to our current indoor shutdown.  We might be allowed back inside, at least for very small groups, in the very near future.  If and when we can proceed safely, we look forward to moving back into the comfort of our building.”