Desmond calls delay “slap in the face” of tribal nations 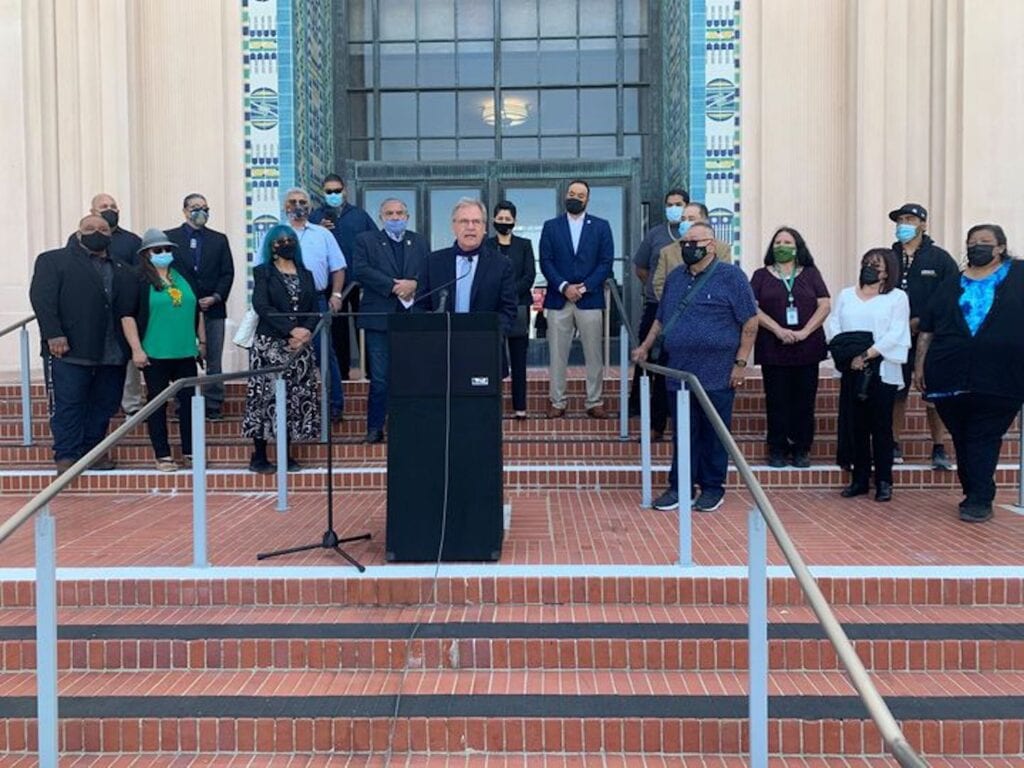 Last week 5th District Supervisor Jim Desmond met with San Diego County tribal leaders in support of a proposal that would change the automatic opposition to tribal fee-into-trust land applications by the County.

“I think this is a slap in the face of our tribal nations,” declared a disappointed 5th District Supervisor Jim Desmond Wednesday after he couldn’t muster board support to move on a resolution that would significantly change how County government interacts with tribal governments.

Now, the soonest the measure will be re-considered is May 15. The postponement happened after public testimony that included statements of support for the change from tribal leaders that included Chairwoman Erica Pinto of the Jamul Indian Village, Chairman Bo Mazzetti of the Rincon Tribe and Chairman Temet A. Aguilar of the Pauma Tribe.

After the vote, Chairman Mazzetti told The Roadrunner: “It’s very, very disappointing. There was no reason to postpone. Who was in opposition?  We don’t know who the opposition might be. All we are asking is that a decades-old policy, to oppose all fee to trust— which Supervisor Desmond brought forth to evaluate on a case-by case basis—be changed. It’s really almost a racist policy and I don’t use that term lightly.”

The board letter was entitled: “Framework for our future: cooperative approach to tribal governments and fee to trust proposals.” SD County has 19 Indian reservations—the largest number of any county in the U.S. This also means it has more Indian casinos than any other County. Desmond’s district includes six reservations.

Desmond criticized the delay in voting on the measure that would repeal current policy of opposing all tribal applications to the federal government to put land into trust. Such land essentially becomes a part of the reservation. It is no longer subject to state or county taxes or jurisdiction.

The blanket opposition by the County government to all tribal fee-to-trust (FTT) applications to put land they purchase into sovereign reservation land was adopted in 1994—well before the dawn of tribal gaming in California. From the moment Resolution No. 94-115 was adopted, County staff has opposed all FTT “applications regardless of case-by-case information or merits of the request,” according to the staff report. It added, “On June 13, 2001, the Board of Supervisors adopted strict criteria for tribes to obtain liquor licenses for their facilities through Resolution No. 01-162. Many of the required criteria go above and beyond liquor license requirements at similar establishments.”

During the discussion, Desmond said: “It doesn’t change any process. We can still oppose projects we don’t like or we don’t want or we don’t think are worthy. it just takes away the blanket upfront ‘no.’ ”

What it does, said Desmond is “remove the blanket ‘no’ to everything. We have this relationship with the tribe and I think it’s terrible.” He said the County would be highly criticized if this was done to any other group. “We are saying, ‘Don’t even come to us with anything any changes that you want’ or just the upfront answer is no.”

The main objection to moving on the item came from Supervisor Nora Vargas of District 1—who was actually its co-sponsor! Desmond asked if there was some clarification he could give, “that might allow us to move forward today? Or is it possible to perhaps do the right thing today?”

Vargas said part of her reluctance to vote Wednesday was because of the extremely long session Tuesday when about 200 persons testifying about rental assistance ran the meeting until 11:30 p.m. “Otherwise I would have made time to address some of these concerns. So I just want to give my constituents a little bit of time to have the conversation and —as I stated in my comments— I fully support the intent of this letter. I just want to make sure that I address some of these concerns. I’m happy to come back on May 5th and move forward.”

Desmond wasn’t appeased. “I think this is a slap in the face to our tribal nations that we aren’t removing this barrier between us. Hopefully we’ll get it done on May 5th,” he said. “This is embarrassing!” He added, “This has been out there since last Thursday night. I know yesterday’s meeting was long but we had time to speak with the tribes several times and I’m just sad at the way this is going.”

Chairman Mazzetti explained to The Roadrunner that the tribes get treated “special” on liquor applications through the county. “We get special attention,” he said. “We ask to be treated like everyone else.”

Where a change in County policy would come into play, he said, is in situations like when there are “islands” of private land inside a reservation. “In our reservation we have several parcels considered fee land,” he said. “it’s our policy for us to buy them and put them back part of the tribe. The County opposes that when it provides no services except for collecting taxes. The tribe provides trash and water, and the County would oppose us and has opposed us.”

Mazzetti said many years ago the County “acknowledged the tribes’ regulatory authority for all land within their boundary. It’s not new. It’s already been acknowledged by the county of San Diego.”

Desmond proposed the change after tribes in his district asked him to look at it, said Mazzetti. “We were dumfounded when Nora Vargas—who co-founded it with him, voted to kick the can down the road. Had she or her staff had any questions I or anyone would have answered them.”

Mazzetti added, “When a tribe is able to buy land—which not all tribes are able to do—it’s a long tedious process, that could last up to twelve years. The tribe buys a piece of land the owner is willing to liquidate, then they petition the Bureau of Indian Affairs to put the land into trust.”

Once land is put into trust, he explained, it belongs to the U.S. Government, and is held for the beneficial use of the tribe. “Before you can start that process it must be free and clear,” he said. “That process is not something that happens overnight. Once the land is entitled to the U.S. government for beneficial use of the tribe, when the land is put into trust status, federal impact aid is paid to the school district.” Federal impact fees are paid by the federal government to the state and county for lands, such as Camp Pendleton or reservation land, that don’t pay County taxes.

Mazzetti added, “What is the County losing through property taxes? If we have a piece of land and the County loses the taxes, you have to evaluate what does it provide? We pay for a fire department that responds all over. That’s not a dime to the taxpayer. That’s a benefit to the taxpayers of San Diego county. We pay for two deputy sheriffs and they could respond anyplace. I think that’s a benefit to the surrounding communities and taxpayers.”

Mazzetti said that if the County loses the taxes from a property it no longer has jurisdiction over, “that tax is made up tenfold in what the tribes do that benefit the community.” He concluded, “We just want a fair and equitable review. We’re very disappointed by the board action. At that treatment.”