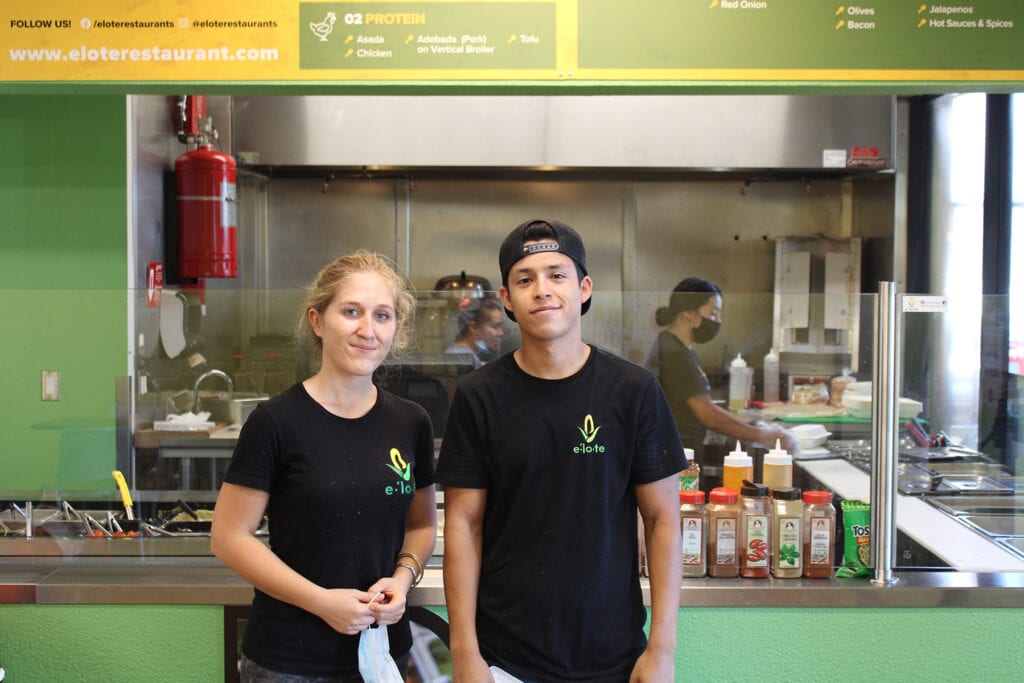 E•’lo•te owners Marie Aldebert and Genaro Rodriguez, who operate the eateries in Valley Center and Escondido. Photos by Harshawn Ratanpal

In Spanish, E•’lo•te  means corn on the cob. Thanks to Genaro Rodriguez and his family, it means that and a lot more to Valley Center and Escondido.

For the last four years, the E•’lo•te corn stand has served Valley Center with a myriad of fresh produce at the entrance to Woods Valley Road. With grander ambitions in mind, Rodriguez and his girlfriend Marie Aldebert expanded the brand to Escondido, opening the newest spot for burritos, tacos, baked potatoes and corn a little over three months ago.

Rodriguez has an entrepreneurial background. In addition to the E•’lo•te stand, his parents grow and sell strawberries and run the Rodriguez Nursery in Valley Center.

“I’ve always been very business-oriented, always into building something for myself,” he said. “That’s all thanks to my parents. We come from very financially unstable families … But when you’ve been in that situation, you try everything to not be in that situation again.”

After running into regulations when trying to build a similar stand in Escondido, Rodriguez reinvented the brand and began building E•’lo•te, the Mexican restaurant.

“My brother tried a while back,” Rodriguez said. “[The City of Escondido] didn’t allow our concept with just the [pop-up] in the corner; they have stricter rules since it’s incorporated. So, we tried to find loopholes, but the city was pretty persistent. So, that kind of forced us to expand into the full restaurant.”

Escondido immediately proved to be a double-edged location. While Rodriguez hoped to capitalize on the Mexican-American clientele, he didn’t realize that, between the likes of TJ Tacos, Los Charros and Lourdes, the niche and stomachs had already been filled. So, he differentiated. 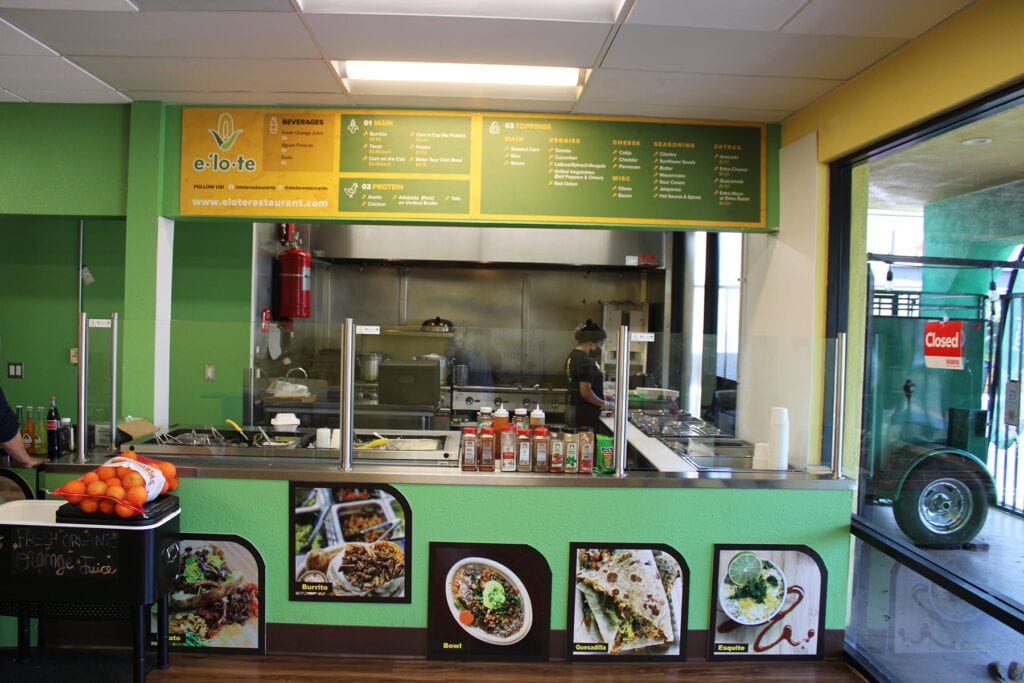 E•’lo•te in Escondido is a small operation but the owners have big plans.

Unlike a traditional Mexican restaurant, E•’lo•te has a limited menu of a handful of dishes. Once a customer decides between a burrito, taco, corn, or potato, then they can pick which protein and toppings they want.

Other hallmarks include an open kitchen so customers can quickly get their food after ordering from a kitchen they know is clean. Also, Rodriguez prioritizes high-quality, fresh and diverse ingredients so that both the tastebud-driven omnivore and health-conscience vegan can enjoy burritos together, even if it means higher prices than more traditional spots in the area.

The leap from corn stand to dine-in eatery challenged Rodriguez, but his cooking and marketing skills combined with Aldebert’s business expertise and funding made it possible.

Aldebert immigrated to San Diego from France three years ago to earn her master’s degree, studying hospitality management and international business. She was also a manager at The Peninsula Beverly Hills Hotel.

A French vegetarian, she prefers to leave the customer communication and meat preparation to Rodriguez while she takes charge of employees, scheduling, suppliers and most of the back-end work.

The E•’lo•te restaurant in Escondido on East Valley Parkway.

With the restaurant in its infancy, it’s been difficult for the owners to gauge their success as lucrative weekends can be followed by lousy weeks. In general, Aldebert is proud of the progress they’ve made and the options they offer. Rodriguez is too, though he retains his ingrained conscientious attitude.

“He’s very ambitious and a really good worker,” Aldebert said. “His only weakness is just that he gets worried very easily. It’s a lot of work sometimes, and on the days it doesn’t pay off, it makes him worried.”

Despite the downs, the ups keep the young entrepreneurs optimistic, and ambition keeps them hungry.

“You know, that’s the thing that excites me the most, the potential it has,” Rodriguez said. “I remember driving to LA . . . and you go through all the buildings, and there are big names of brands on huge skyscrapers. And maybe we could do something like that; imagine having your name on a big skyscraper. This kid from nowhere built this, it’s exciting to think that we have a shot at that. Everything’s a possibility. 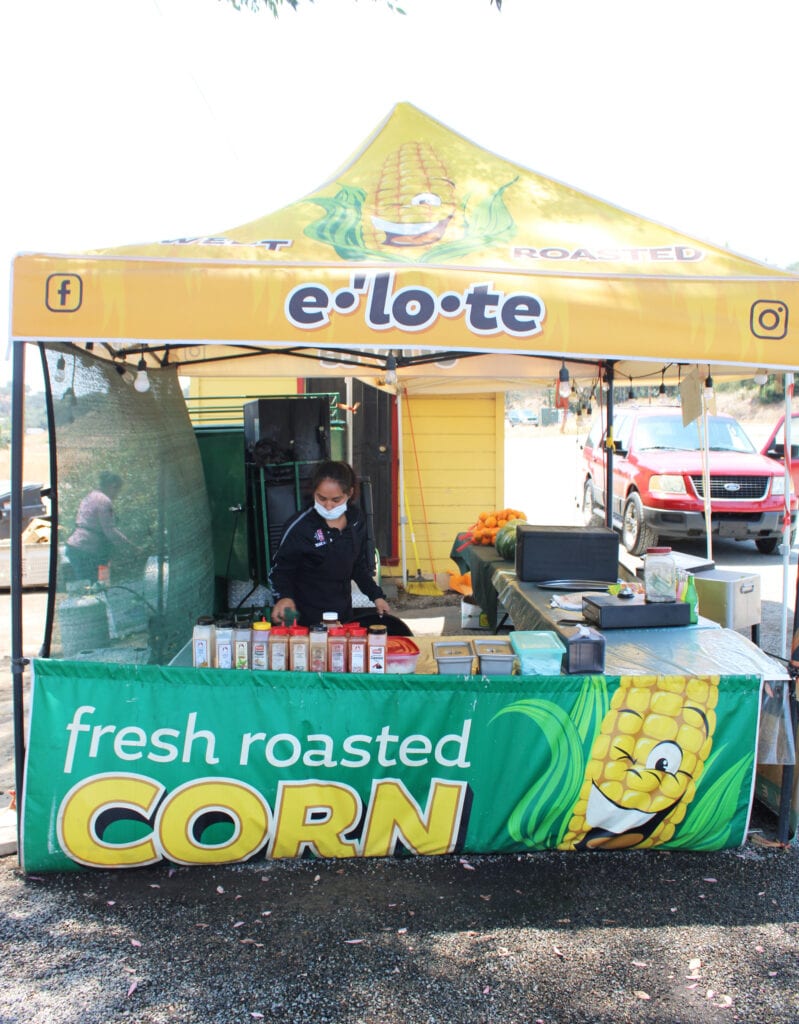 The E•’lo•te stand in Valley Center that started it all.

The restaurant in located at 1760 E Valley Pkwy next door to Kennedys Meat Company.