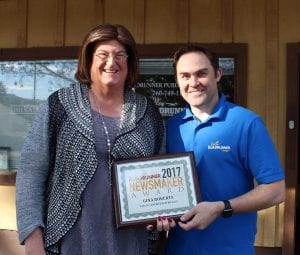 The Valley Roadrunner has named Gina Roberts of Valley Center Western Days as the Newsmaker of the Year for 2017.

The award recognizes a member of the community who has been in the news consistently throughout the year and made changes that affect the community.

Roberts spearheaded starting Valley Center Western Days, Inc. in 2016 and the group agreed to take up the challenge of putting on the Western Days Parade in May 2017.  She has taken a consistently conciliatory approach to dealing with all groups in the Valley.  The group’s purpose is to provide support and encouragement for any function that occurs during Western Days (i.e. the three-day Memorial Day weekend and days leading up to it) as well as supporting other community activities.

The group has obtained its 501(c)3 nonprofit status last year. That will allow it to accept tax-deductible donations.  This is the first time since the events inception Western Days has been an independent group not piggy-backing off another local non-profit.

“The whole idea is to keep it being a community organization to further the needs of the community as opposed to any particular group of people,” Roberts told The Roadrunner.

“I’m excited that we were able to donate to the Vaqueros for their Rose Parade entry. It was a classic case of doing good for the community. And we’ve been successful in obtaining our grant of $8,000 from the County for this year that will help our fundraising and philanthropic enterprises,” she said.

“I’m a great believer of if you don’t like the way things are to participate and try to change things from the inside. It’s very rewarding to serve the community and I love doing it. I love the Kiwanis and all of the service clubs in town are very cool.”