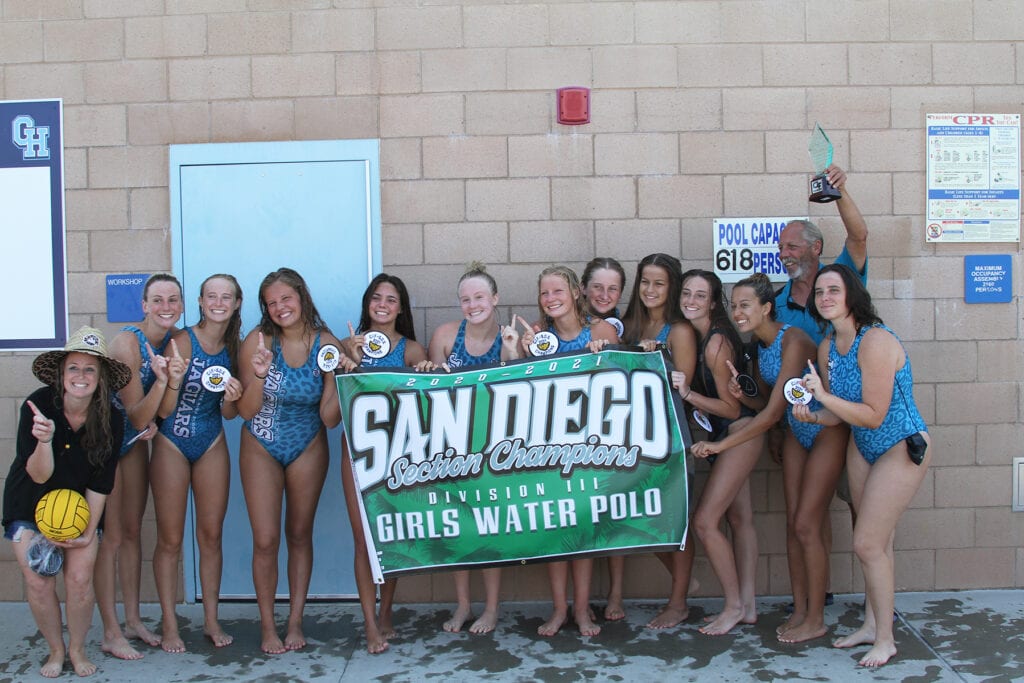 VC’s coaches and players were overjoyed to be celebrating a Division 3 title. Photos courtesy of Parker and Rebecca Tanne

Entering the 2021 season, the Valley Center girls water polo squad carried with it very high expectations and plenty of optimism.

There was no doubt that coach Scott Morrison’s crew was bent on accomplishing something special. The Jaguars were hunting for a title and nothing less was going to satisfy them. “That was the goal that we had set in our minds,” says Morrison.

VC’s positivity was clearly justified. Emboldened by a prior postseason experience and bolstered by a deep squad that returned several seasoned players, the Jaguars seemed poised to accomplish something truly noteworthy. So if they performed up to their potential, then a championship appeared very much within their reach.

To their undying credit, the Jags went out and grabbed one in a most impressive manner.

On June 19 in a Saturday morning finals matchup at Granite Hills High, the Jags dispatched Mater Dei by a 11-4 score and took home the CIF San Diego Section Division 3 crown. It was a thoroughly convincing effort by the victors who were up by four goals after the first quarter and never looked back. The revved-up Jags swamped the Dons, who simply couldn’t deal with either VC’s firepower or defensive prowess.

That win over MD culminated in a terrific playoff run by the Jags and more than validated the No. 1 seeding they were given heading into postseason. After blitzing Oceanside 12-1 in a quarterfinal match, VC then drubbed San Marcos 11-2 in the semis before handing the second-seeded Dons their own one-sided defeat. VC’s playoff push was so overwhelming that none of its opponents couldn’t even tread water, let alone keep their heads above it.

Morrison readily admits that his team operated at an optimum level during its postseason roll. “Definitely, those three games were our best of the year,” said Morrison. “We played great defense and the offense just flowed.”

Capturing a coveted championship was a fitting cap to a splendid campaign that featured a number of achievements that merit mention. Not only did the Jags post a sparkling 13-2 overall record, but they also outscored their foes by a huge 185 to 58 differential. Plus, fashioning a lengthy seven-game winning streak was another prominent highlight of a most memorable campaign. “We just came out strong in the beginning and never really stopped,” said Morrison when encapsulating how the season unfolded and ultimately played out.

Anchored by a stingy defense that was often suffocating and bonded by a team chemistry that fostered a togetherness and sense of comradery that was palpable, there was simply no denying the Jags. At times, their journey to a title seemed almost as inexorable as an incoming tide.

A definite key to VC’s success rested on the fact that the team got invaluable contributions from every member of the 12-player varsity. Being the beneficiary of such extensive depth meant the Jags had plenty of options on how to deploy their talent most effectively at any given time.

Nonetheless, as with any team, there were those whose efforts loomed particularly large.

In senior Serenna Van Camp – considered to be a rock of the team – the Jags possessed an awesome scorer (47 goals, 31 assists) who could take over a game and dominate from the hole set. A four-year varsity performer, Van Camp also led the team in drawing ejections from the opposition.

When it came to packing a punch on both offense and defense, junior Analise McCoy had no equal. Not only did McCoy rack up a hefty total of 36 goals but her uncanny knack for creating steals (42) absolutely drove foes to distraction. 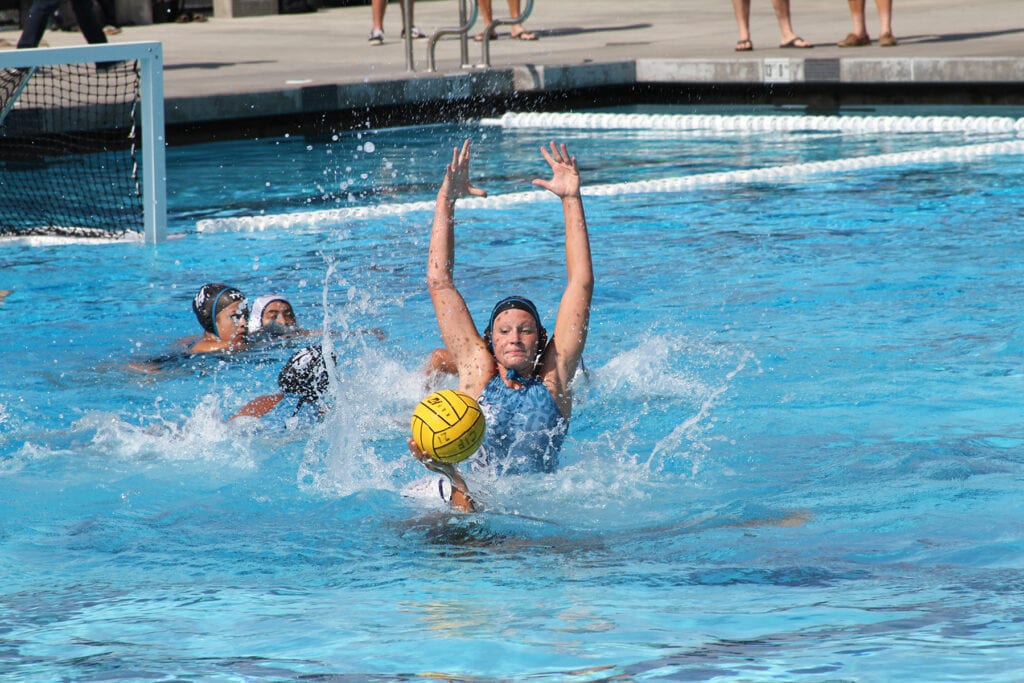 It was smothering defense like this from Jag Kylee Harrington that was a cornerstone of Valley Center’s banner season.

Another consequential performer was Hannah Morris, a physically strong junior who made an impact from the outside and in deep. Her notable stat line of 27 goals, 30 steals and 13 assists attests to her overall skill and versatility.

Thanks to outstanding speed that allowed her to separate and win plenty of crucial sprints, gifted sophomore Kylee Harrington was a main cog who proved to be a highly productive scorer (33 goals) as well as a most dangerous thief (28 steals).

Swiftness in the pool was also a strong point of Siena Mcaulay, an influential junior whose 20 goals and 28 steals revealed her worth whether VC was attacking or defending.

There’s no way the Jags could have reached the pinnacle without the outstanding work of stout goalie Madelyn Rutherford. Putting her previous varsity experience to good use and equipped with an advantageous arm reach and quickness, Rutherford registered 162 saves on the season and averaged better than 10 stops per outing. This junior was also instrumental in other areas as her 16 steals and 13 assists certainly demonstrate.

Though not wanting to make himself a focal point, veteran Coach Morrison did a masterful job of getting his team to consistently execute at a high level. He helped foster a winning and inclusive atmosphere that helped his players dream big and perform up to lofty expectations.

Coaching kudos must also go to assistant Aszurae Penouden, who has had a major impact on the program during her four-year stint with the team. In particular, her considerable influence on the current squad can’t be underestimated. “She’s done a fantastic job,” praises Morrison.

With a squad that will be returning plenty of experience, potent scorers and proficiency in goal, the Jags will once again be setting their ambitions sky high when they convene for next season. “We’ll be looking to win another CIF title if we can,” acknowledges Morrison.

But that hope lies in the future. For now, the Jags will be content to cherish the championship they just secured and fondly reflect back on a tremendously rewarding season in which they made not only a huge splash but left a lasting legacy.