Honors for service given at VCBA banquet 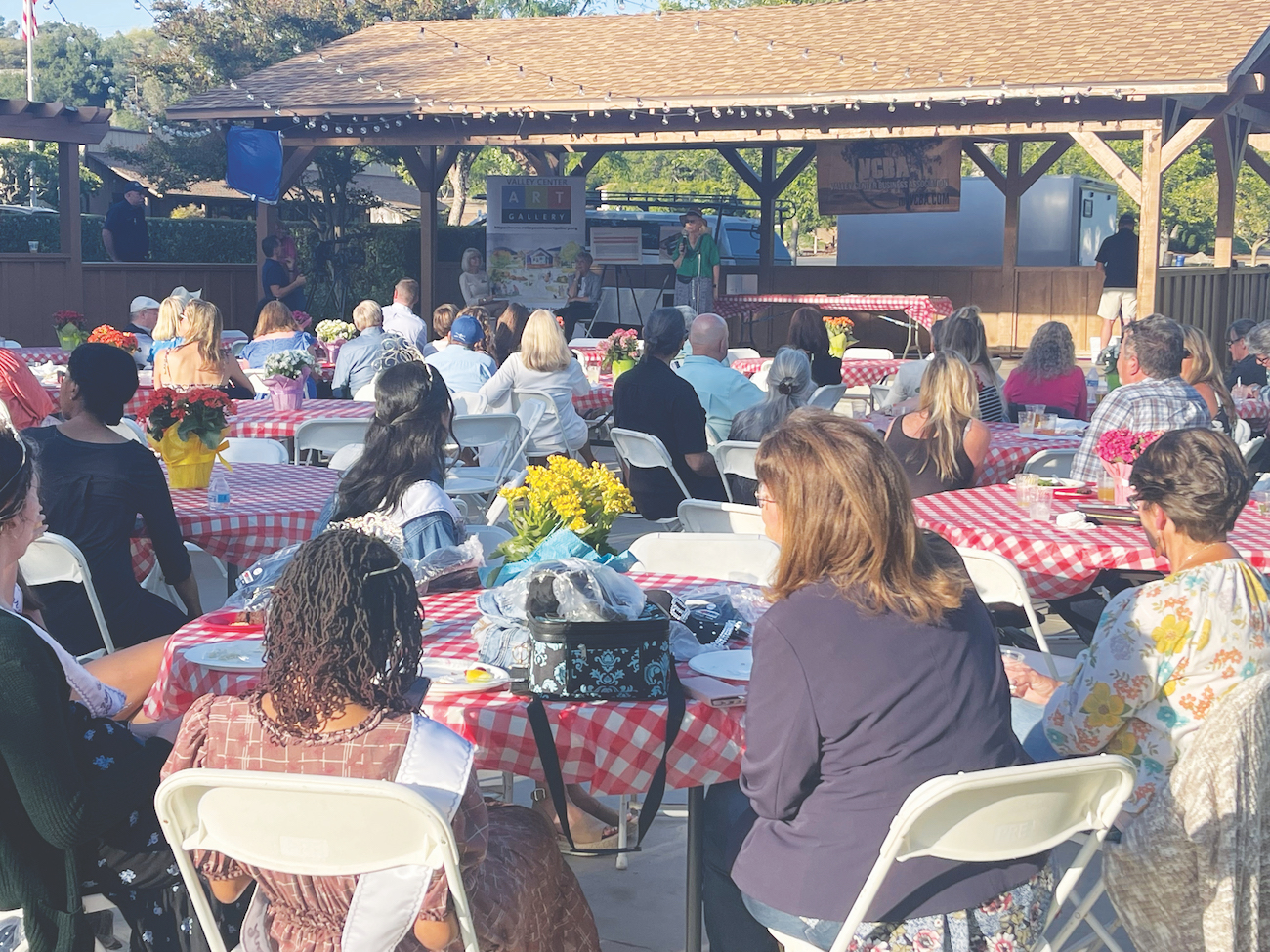 Some of the attendees of the Valley Center Business Association’s 2nd Partners in Excellence – Annual Partners Meeting.

The highlight of Tuesday’s Valley Center Business Association’s Partners in Excellence – Annual Partners Meeting at Bates Nut Farm came when four members of the public were recognized for their contributions:

Spirit of the Community:  Craig Adams.

Volunteer of the Year: the late Jim Weaver.

Nominations for Valley Center’s most prestigeous annual awards are submitted by the community to the Roadrunner.  Winners are selected by an outside group based on nominations and independent research. 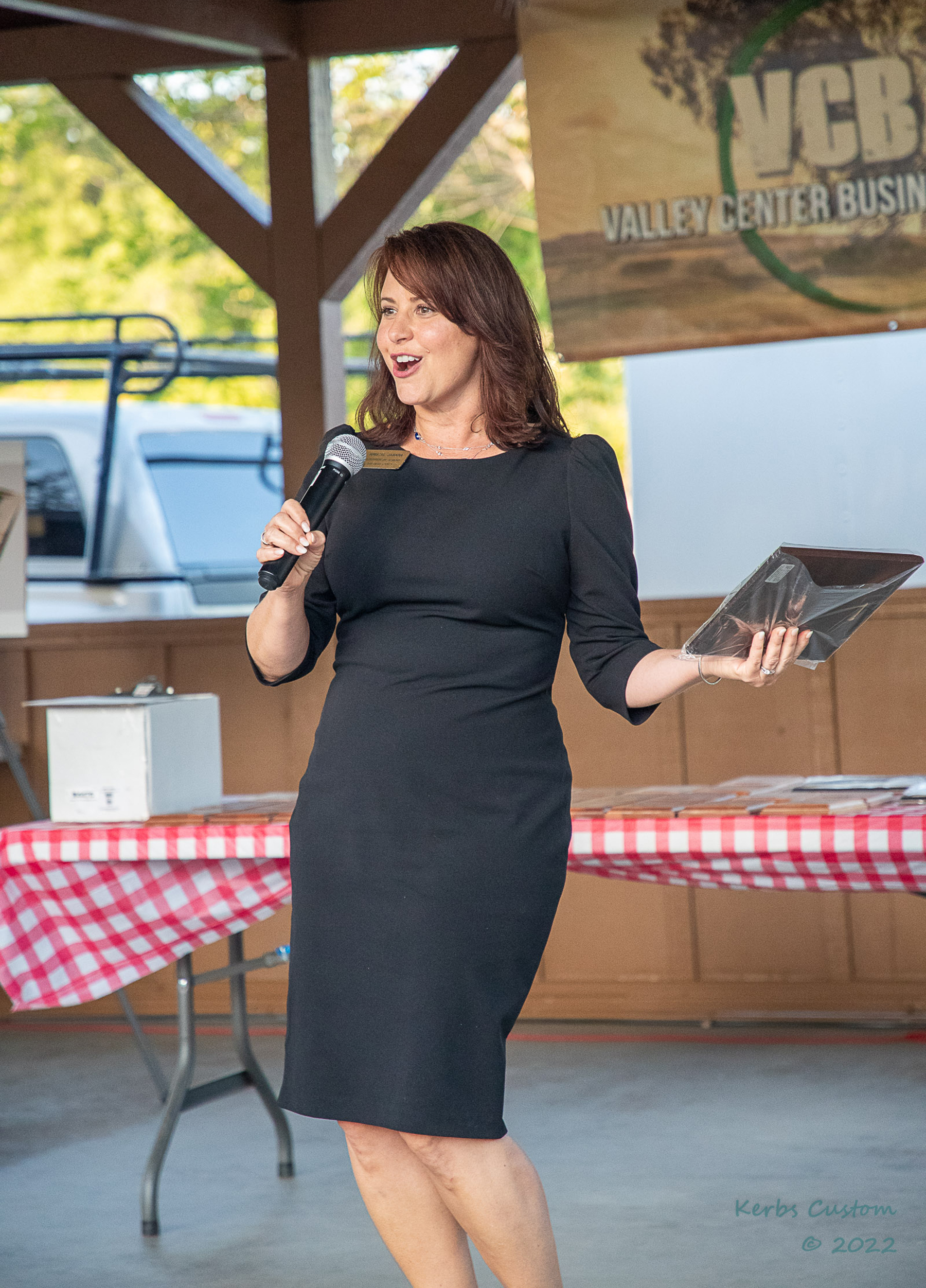 The Person of the Year award went to Supervisor Jim Desmond, who rose to the top from 49 nominees  by community members for the honor. Accepting the plaque was Desmond’s aide Kristal Jabarra, director of community affairs, who said, “Jim loves Valley Center. One thing he loves about the community is that they know what they want and get together to make it happen.” Desmond was unable to attend because the banquet conflicted with a Board of Supervisors meeting. 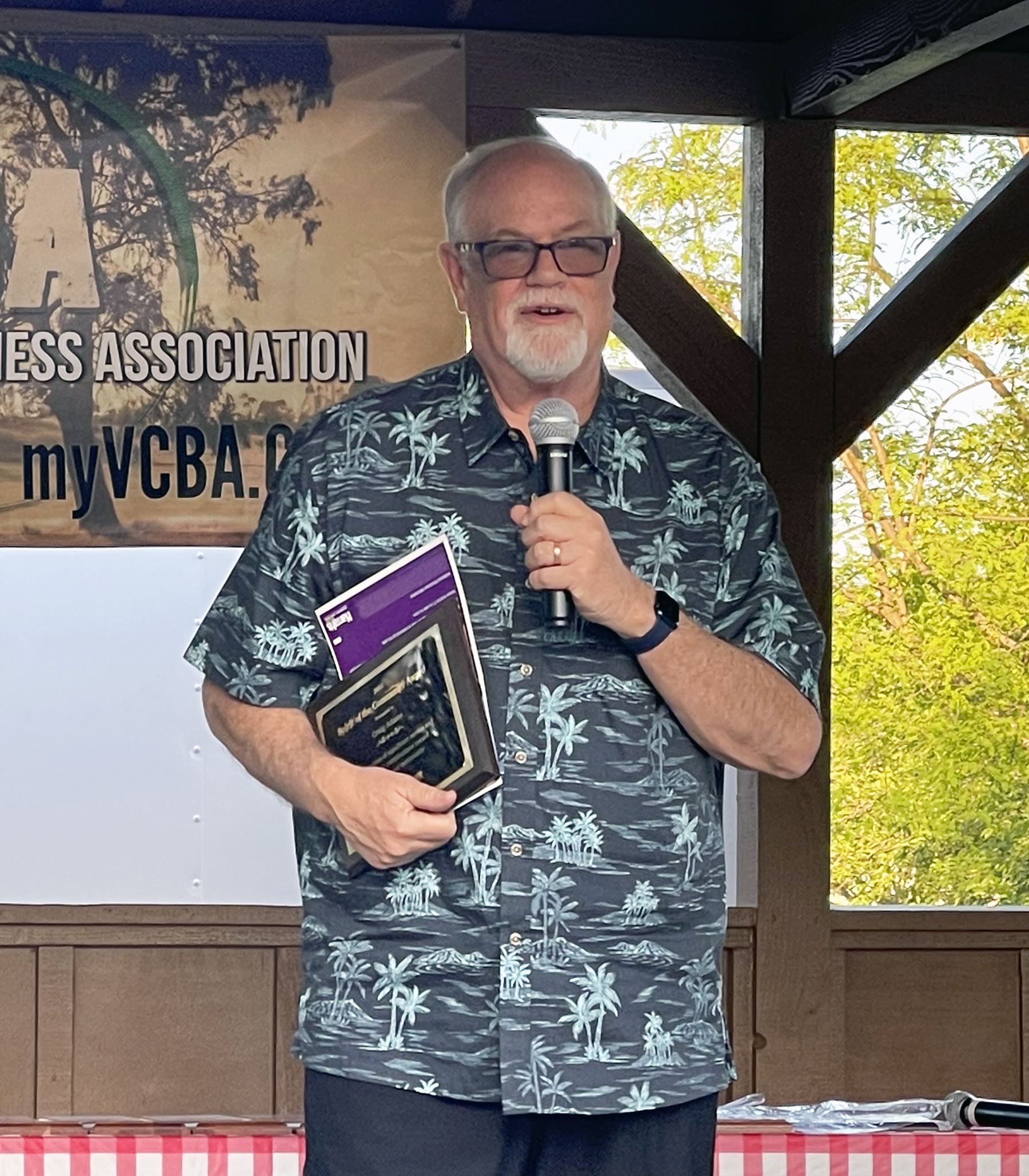 Craig Adams, who received the Spirit of the Community award Tuesday night.

Craig Adams said, “I was touched by this award and surprised and honored out of 49 nominees to receive the ‘Spirit of Valley Center Award’ for my 30 years plus of service to the community of Valley Center. I’ve always believed one should always do whatever you can to make your corner of the world a better place, and I will continue to do so as long as I am able. Thanks to everyone who helped make it possible. There have been so many through the years. It really does ‘take a village.’ ”

Jim Weaver, recipient of the Volunteer of the Year award, died in a boating accident north of Lake Havasu last year. For many years he was a volunteer with the Valley Center Fire Protection District, mainly in the field of fire prevention. Jim Davidson, VC fire marshal, remarked, “Jim was one of our volunteers and we miss him very much.” 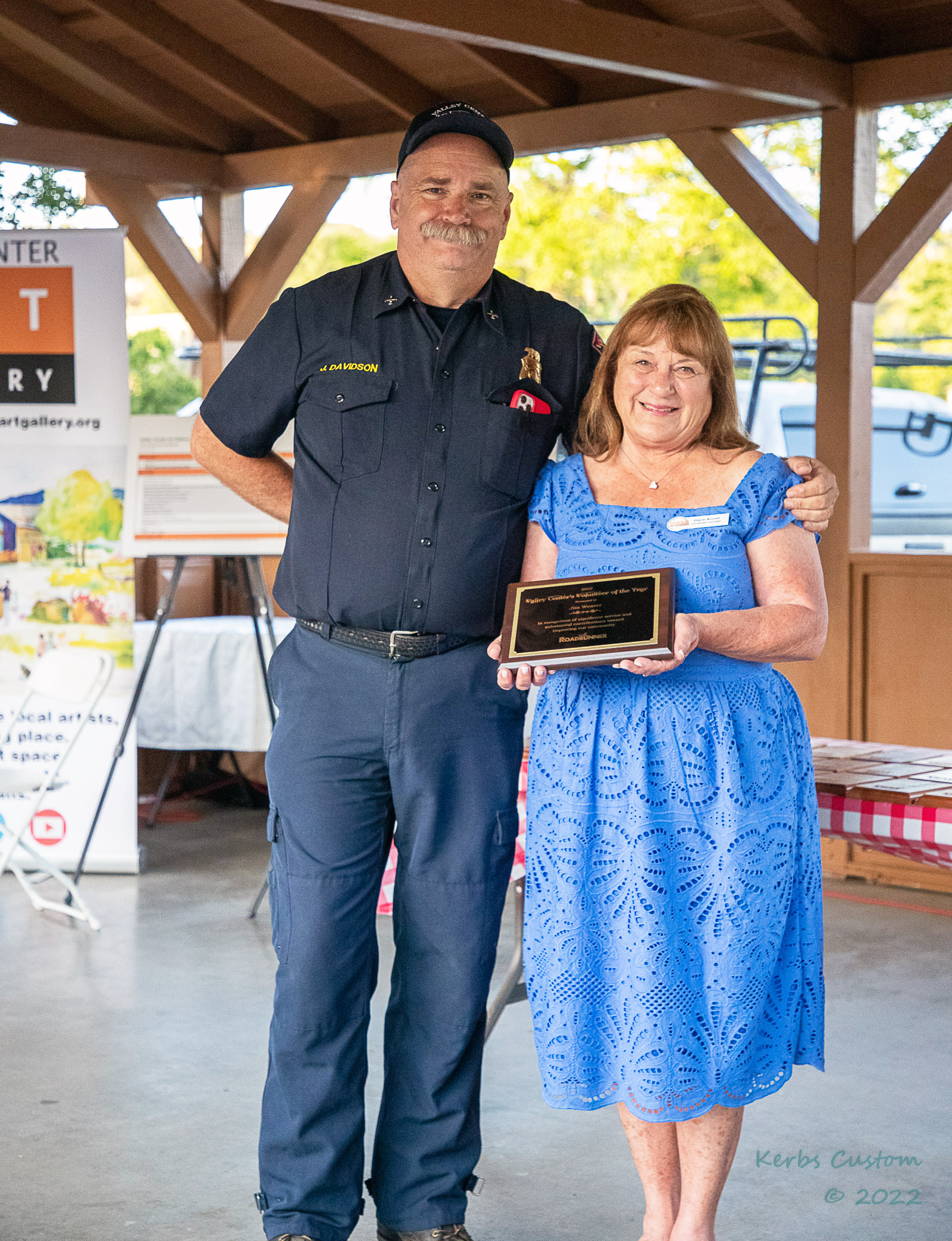 Tuesday’s MC, Jim Davidson and Diane Arnold of VCBA hold the plaque honoring Volunteer of the Year Jim Weaver, who died last year. He was honored for his work with the Valley Center Fire Protection District. Photo by Lenny Kerbs

Diane Arnold, who presented the plaque to Davidson, said, “I was touched by his dedication. He touched so many hearts and he was always behind the scenes.”

The plaque honoring Weaver will be displayed at Fire Station No. 1. It reads: “In recognition of significant service and substantial contributions toward improving our community.” 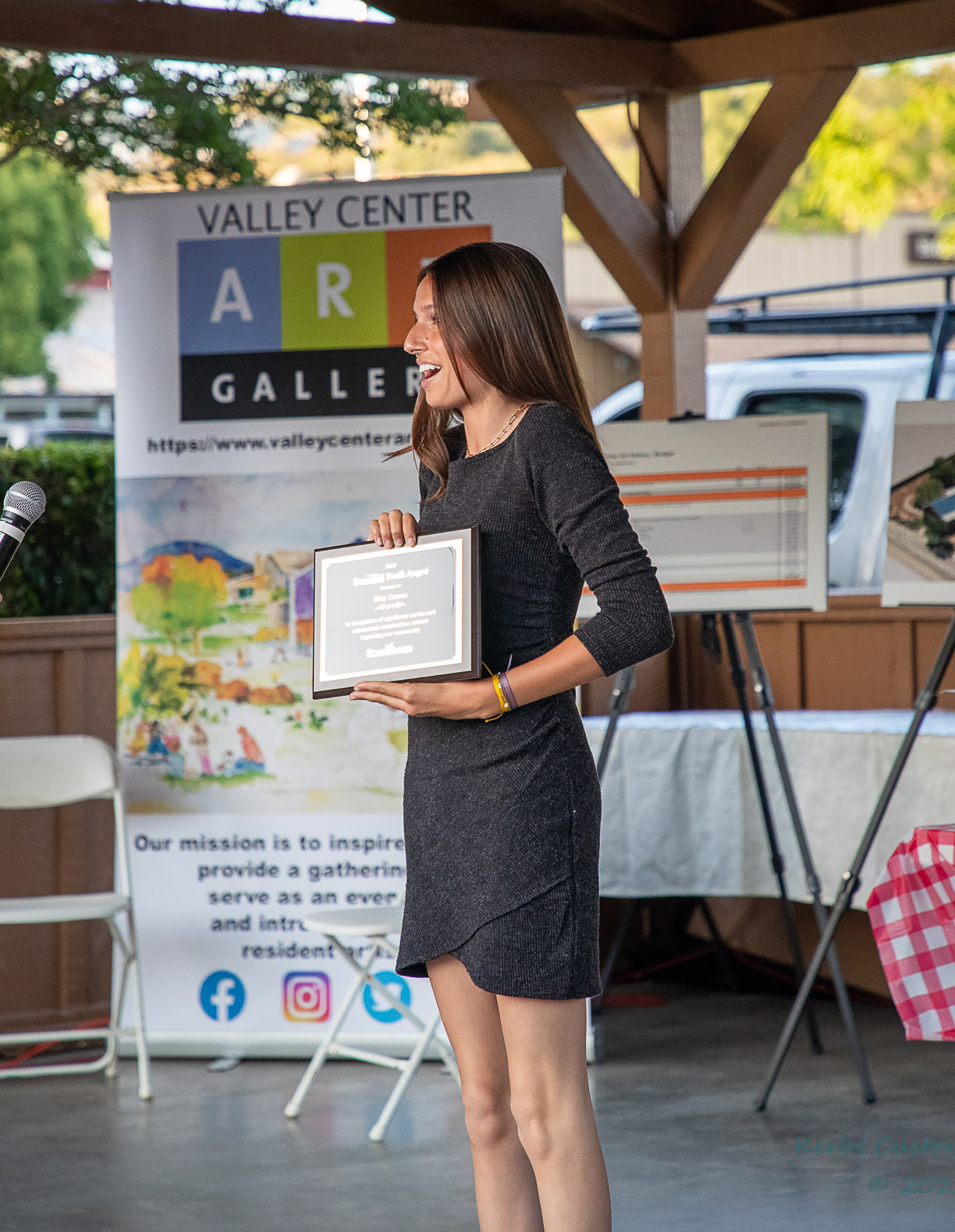 The Emerging Youth award went to Riley Carlson. Described as a “tremendous volunteer” this 16-year-old is the daughter of local dentist Greg Carlson and his wife, BB. Photo by Lenny Kerbs

The Emerging Youth Award went to Riley Carlson, 16, who was described by Diane Arnold, who nominated her for the award, as “a tremendous volunteer.” She first met Riley when she was one of the students honored by the VC Rotary Club.

The VCBA annual meeting wasn’t only about awards, however. More than 100 people dined on cuisine prepared by Julie Stroh. VCBA Treasurer Diane Arnold talked about the benefits of becoming a “partner” in the VCBA with non-profit/service group memberships costing $25 for a year and $100 for businesses.

“We meet the 2nd Tuesday of the month at Shawii Kitchen for the Good Morning Valley Center breakfasts, which are absolutely free to attend,” said Mrs. Arnold. She invited everyone to the VCBA’s VC CountryFest September Saturday, September 3 At Bates Nut Farm. Business members are profiled in The Roadrunner, she added. 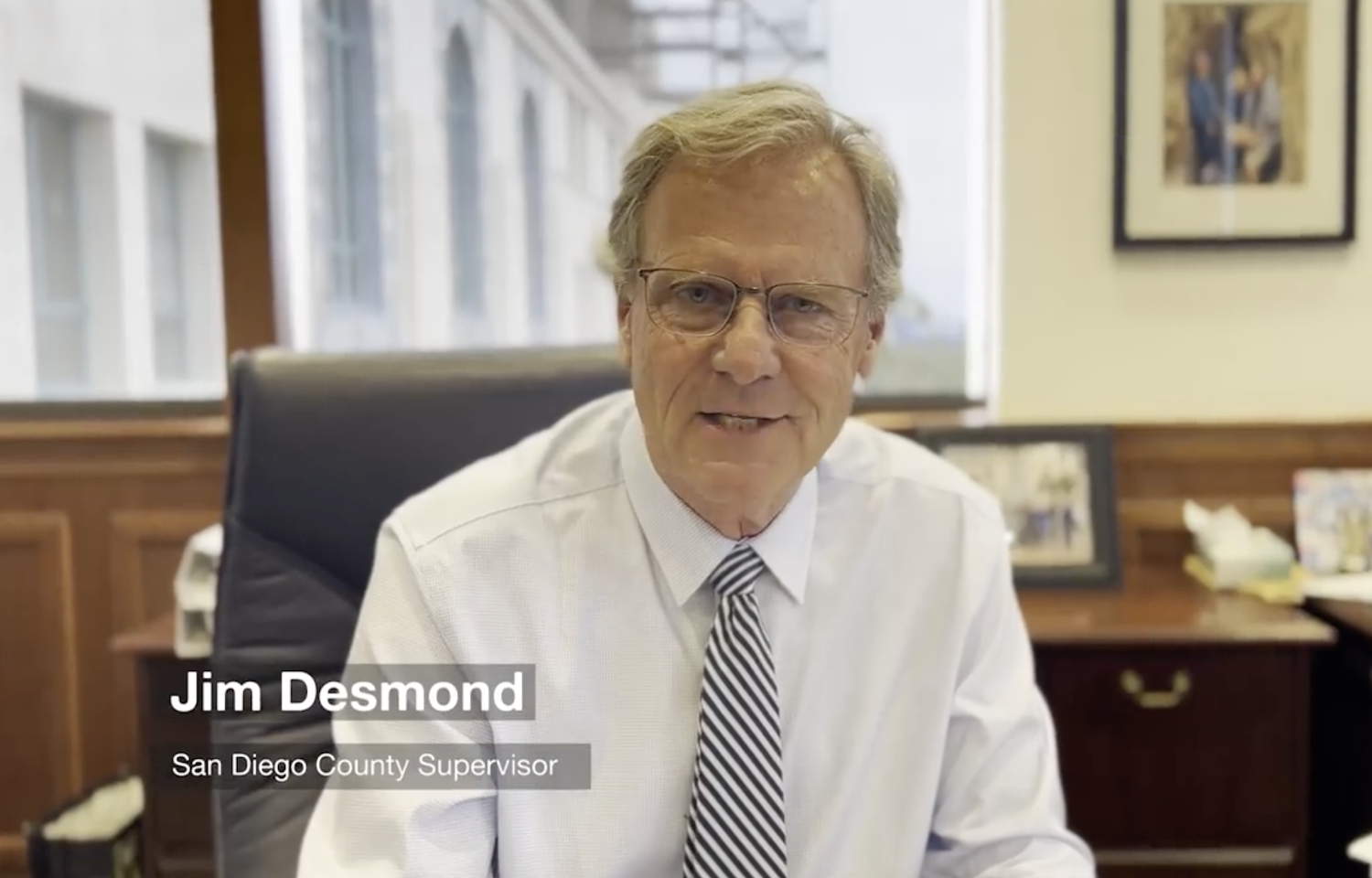 P.J. Campbell, director of marketing and Barb Scharnau, treasurer for the VC Art Gallery, spoke about its fund-raising campaign to build at the county complex adjacent to the library and history museum.

They spoke for Jim Courter, president of the group, who couldn’t attend due to having COVID.

Scharnau recalled how the idea for the gallery originated. The VC Art Association was having an exhibit at the library when Bob Lerner, historian at the VC History Museum, approached her and said, “Barb, you need to have an art gallery, and I’m going to tell you how to get one.”  Since Lerner was very much involved in bringing the history museum into being, she paid close attention to what he had to say. 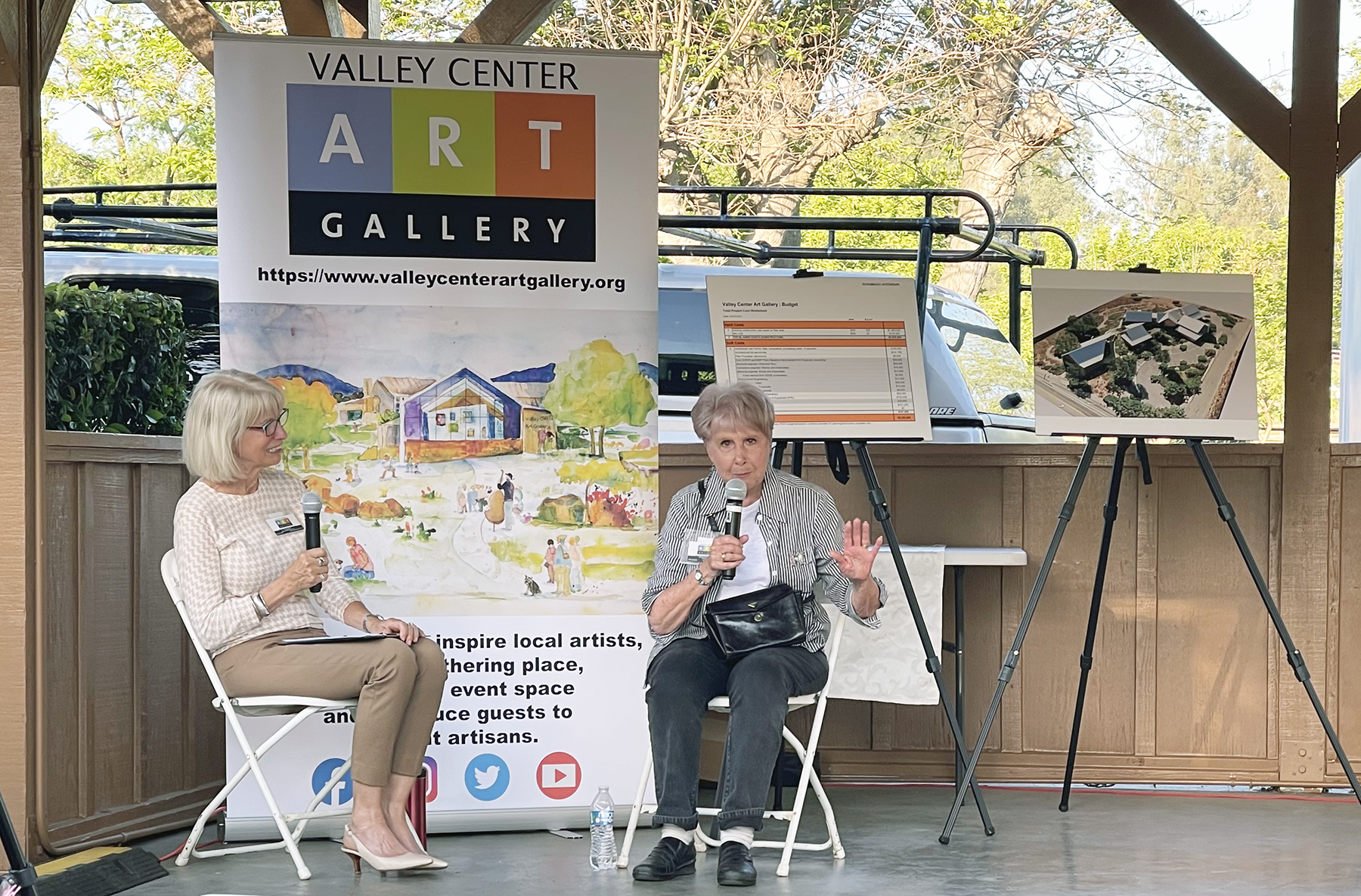 P.J. Campbell, director of marketing (left) and Barb Scharnau, treasurer for the VC Art Gallery Assn., speaking about their dream for a gallery at the county complex on Cole Grade.

The plans are to raise $2.8 million for a 4,000 square foot structure that would be designed by the same architect, John Domini and Associates, who did the library and history museum. Children would have their own art wall, as would Native Americans.  Outside would be a sculpture garden. “We will have pottery, glass, flower art, oils, watercolors. It will also be a home to photographs videos, dance, music and writers,” said  Scharnau. “It will be the cultural hub for the community and interact with the history museum and library.”

The gallery will have a gift shop for artists to sell their works. “It’ll be a great place to buy gifts not made in China,” said Scharnau.

Instead having to shoehorn their facility into an existing building, they will be able to design this one from the ground up. “We will be able to build it the way we want it, make it what we want it to be,” she said. 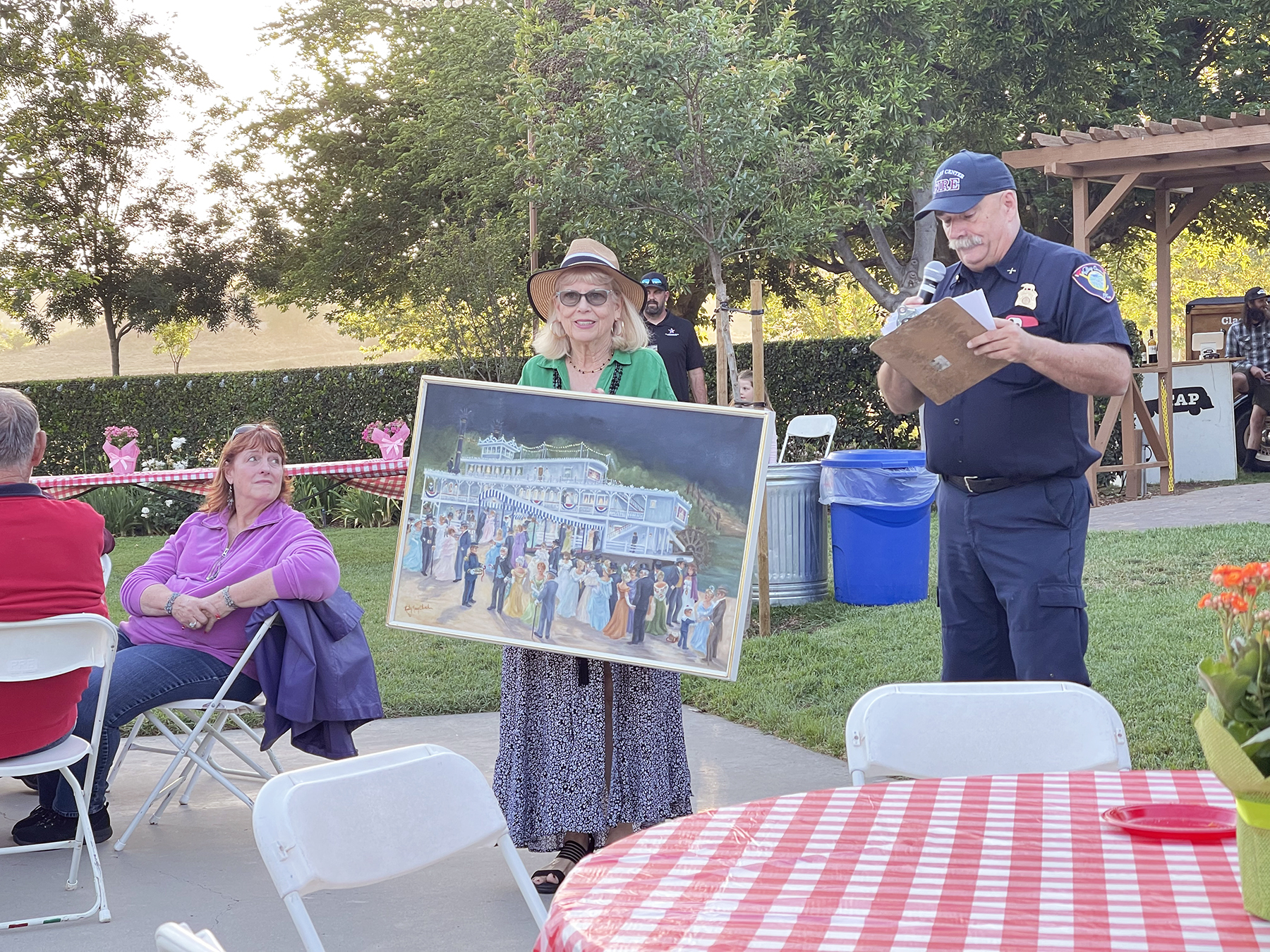 Judith Shadzi, assisted by Jim Davidson, and one of the five art works that were auctioned off Tuesday night to help raise money for the Valley Center Art Gallery. The painting of a river boat was painted by Rusty Money Church.

The County has made the land available for the gallery, said Scharnau. “But we have to raise $2.8 million. Once it is built, she said, “We’ll have a bunch of happy people.” She added, “It will be center for culture in Valley Center.”

To donate to the gallery visit their website: valleycenterartgallery.org. They are looking for Founding Donors to give $2,000.

“So far, we have raised $25,000,” said Scharnau. She asked those attending to, “Let people know there is going to be a gallery home.”

The evening also included VCBA President Faith Much presenting membership plaques to about two dozen new members.  She praised her board for bringing everything together to put on the event.

“I’ve been gone for six weeks and I left things in the very capable hands of my board. They did an amazing job. I didn’t worry a bit.” She added, “We’re definitely a growing organization. 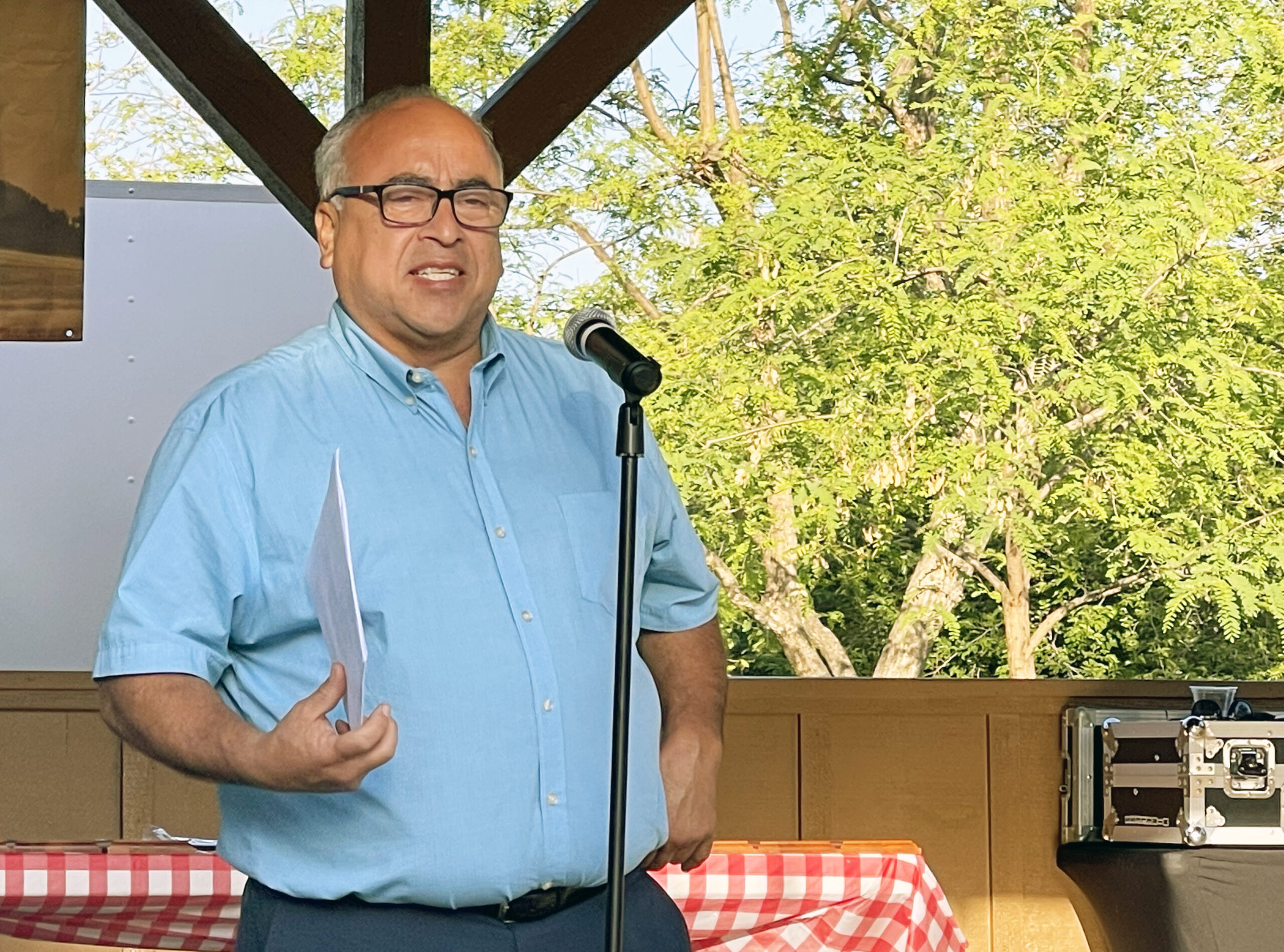 David Zumaya of My San Diego North County, invited members of the community to attend the North County Business Expo, which will be held June 22 at the California Center for the Arts, Escondido. “My focus is how to bring the people of North County together,” he said.