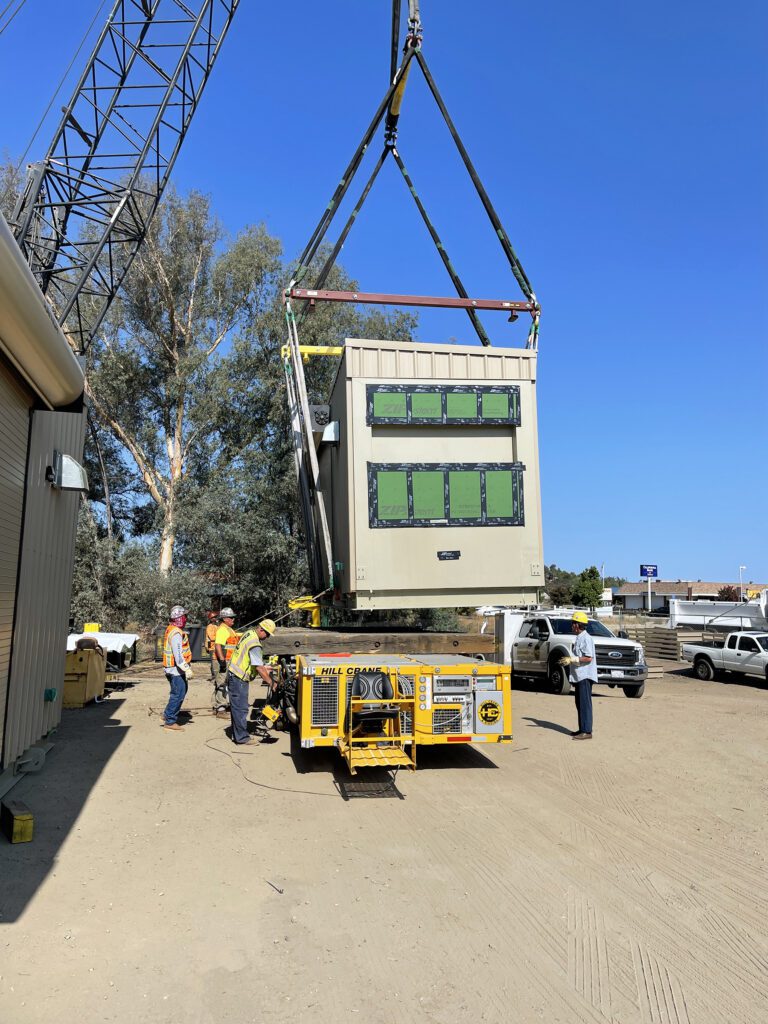 A massive crane gently deposits a multi-ton battery enclose on a flatbed for transport a couple of miles down the road to the Terra Gen Valley Center Storage facility on Vesper. The work is being done on the yard at the corner of Cole Grade & Valley Center Roads across the street from Rite-Aid. The one shown is here is the 20 ton variety. Photos by Jim Davidson

You’re probably reading this because you’ve noticed that these enclosures are affecting traffic on Valley Center Road. To find out more about that, you’ll have to read to nearly the bottom of the article. So be patient—or else just skip down there and satisfy your curiosity. But if you do you’ll miss some interesting stuff!

The Roadrunner spoke to Mark Turner, vice president of development for the San Diego-based company. This is the first battery storage project Terra-Gen has built in the county, although other companies are building similar facilities in Fallbrook and Otay Mesa.

Terra-Gen anticipates being doing transporting the battery enclosures by the first of second week of September, said Turner. And turning it on by the end of October, although that’s more of an iffy proposition.

“Once the enclosures are in place, the lithium ion battery modules are installed in racks,” he said. Electricity is stored and discharged from the batteries to the invertor transformer that is located next to them. “This converts the energy from D.C. (direct current) to A.C. (alternating current) and toward the customers,” said Turner. “That steps it up to the voltage of the substation,” that is located 0.3 miles away.

The further an electricity source is from the substation, the more losses you have. “That’s one of the reasons we chose the location, because of its proximity to the substation,” said Turner.

The connection between the battery storage project and the substation is called a generation tie line, or a gen-tie line. “You could consider it as an extension cord,” said Turner, who noted that the connections are already installed underground.

They expect to complete construction in the second week of October. This estimate is later than originally anticipated, “But the reality is there are global supply chain issues. Everybody is experiencing them, and they are directly or indirectly related to COVD,” Turner said.

There is a shortage of containers, “or the ships are in San Francisco Bay waiting to a spot to unload the containers,” he said.

The Roadrunner asked if the battery storage might alleviate or prevent some planned outages such as  happened in Valley Center last August. “One of the key benefits of projects like this is that it contributes to helping to solve those outages we had last August caused by heat waves and fires,” said Turner. 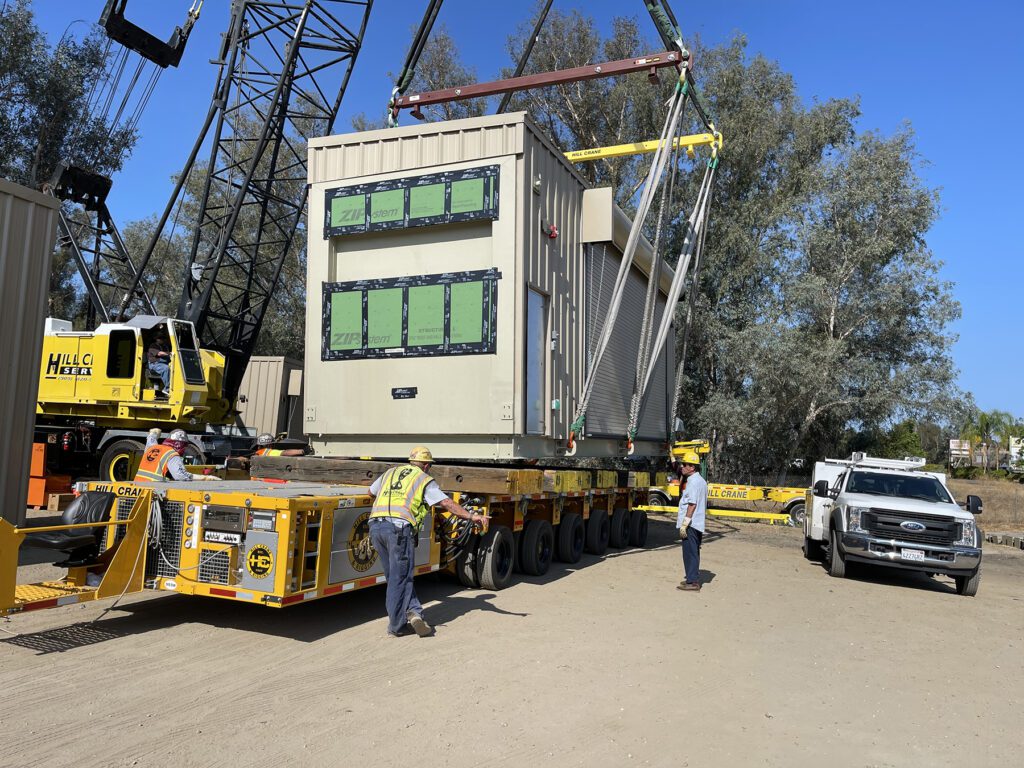 These statewide outages prompted Governor Gavin Newsom to issue emergency orders designed to prevent a repeat. He decreed that California needed 11,000 megawatts of storage to come online in the next two years. “This is part of that solution,” said Turner.

We are all familiar with public service power outages, where transmission lines are removed from service at just the threat of a fire. “When you install battery storage in the load centers where the people live, inside the transmission ‘constraints,’ you help contribute to avoiding outages,” said Turner. “If you get enough of them online, the goal is to contribute to those not happening.”

Now for the part we’ve all been waiting for: the effects on traffic. Exacerbating the traffic problems on Valley Center Road and Vesper are multiple constructions going on at the same time.

“One of them is at the intersection of Vesper & Valley Center Road,” said Turner. “That’s not us.”

It is, in fact, SDG&E’s undergrounding project being done by Michel’s construction. They are going west on Valley Center Road and coming south on Cole Grade Road and will meet in the middle somewhere.

“On our side, we are going east,” said Turner. “We are not able to divert traffic at MacTan. When we bring an enclosure on site it requires a police escort. It requires about 30 minutes. We can divert traffic going west to east, but we can’t divert to MacTan to avoid getting locked up east to west.”

Terra-Gen is trying to update its traffic permit to allow its contractor, Mortinson, to do traffic control. Some studies need to be completed first. “We are working on that solution. We are talking to California Highway Patrol,” said Turner. They anticipate getting the permit within two weeks. “We hope to find something sooner. We can’t redirect traffic without a permit.”

Turner has promised to alert the paper in case any more hindrances to smooth-flowing traffic present themselves.